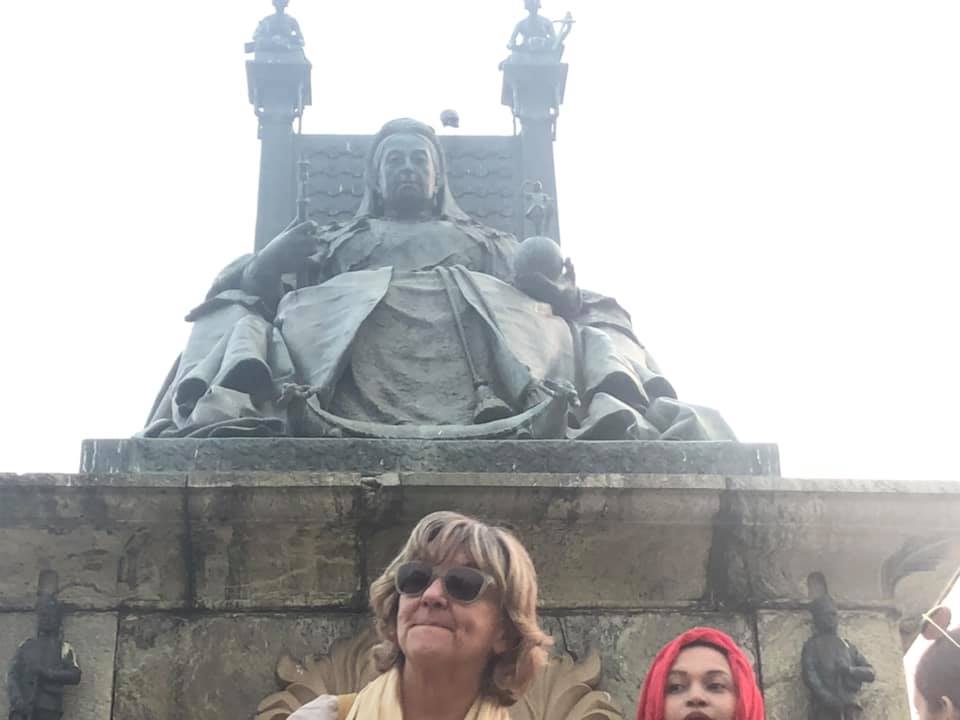 This morning I woke up in the City of Joy,

Hard to imagine after the chaotic train journey we had yesterday. Draughty carriages and the splurge of noisy people with no space or fresh air between them. Train platforms are where you see a different world from. Everybody at their best and worst, Space matters and if you are in theirs they will certainly let you know. We hustle between age old street sellers and the porters, pushing and pulling long wooden carts. Carts so laden with balancing baggage followed by travellers on a mission, running behind, trying to keep up. This morning the memory of my journey resembled a distant dream, the type you wonder, was I really there?

Stretching out on my huge bed in the Airbnb, I welcomed this moment. The small attic apartment up in the rooftops of Kolkata was homely and decorated with an eclectic amount of Indian floral designs. Nothing matched but all lived peacefully together draped and placed over wooden furniture. The light streamed in from my window turning pastel greens and pinks into warm custard yellow, so different from the harsh metal and flaky colourless paint of my train carriage.

It was not early but the tap tap tapping on my windowpane had broken my sleep. I first wondered if it was somebody knocking on the door. Pulling back my pink floral curtain I was startled by the blackbird caught between the glass and the metal screen. Shooing it away, it quickly found a gap and escaped, to join a flock of other birds. I got my first glimpse over the rooftops of the Kolkata neighbourhood as daylight presented it. The stresses of trains and dusty railway tracks trailed away as I took in the scene from my window.

The colours of India that I have always admired decorated the crumbling buildings which fought for survival amongst the stark concrete the where function and form had to stand it’s ground. Yellow ochre, turquoise and pinks, pigments born from earth stand out in defiance and have done so for thousands of years. Without colour, there is no charm. Nature joins in with her own performance as she presents bougainvillaea, a starring role, gracefully clinging to walls and balconies. She steals the show.

I look towards a lady opposite on her balcony, she is drying her scarves over the wall, they blow in the breeze. Old telegraph poles and electric cables criss-cross the pathways and I see a lonely figure walking along a track of worn away patchwork cobbles, where nearby, in the grassy verges, sleeping dogs lie exhausted after a night of roaming amongst the litter.

So much can tell a story. There is a history here that I am eager to delve into, a history that a very small part of me is attached to. The city of Joy is the birthplace of my ancestor John Joseph Juman. He was born here in 1811 and I want to know more about his life.  I can imagine a romantic tale but the reality and truth can paint a more fascinating picture. Imagination and truth will merge, however. Unless it is written down we can never be sure but take note. The written word can play around with truth too. I have to rely on what I face here.

John Joseph was born during the time of the East India Company before the British Raj Era. Kolkata was about to wrap me up in a warm blanket of history as it has been written. I want to shake off the security of images of Imperial pomp and all that stuff. I want the story by John Joseph.  He has brought me here. Who was he? And what is his tale to tell?

My friend Nitin and I decided late afternoon to take a taxi into the city and visit the Victoria Memorial. The city is vibrant. It is the capital of West Bengal on the east side of the country. It was the capital of British India until 1911 before they changed the capital to Delhi.

I had always believed the memorial was just a statue of Queen Victoria so was impressed and excited when I saw the magnificent state-building, proudly positioned in landscaped gardens. Two marble lions guard the entrance as we join the long queue to purchase our tickets. I seem to be the only European although we later stumble into a couple of German travellers.  The Indians love this place it seems and I wonder about their thoughts on the British Raj Era.  Nitin laughs as he informs me that my ticket will cost 500 rupees compared to his which is only 30 rupees. As I’m about to complain he reminds me about the amount of money the British stole from India and jokes it is one way of getting some of it back.

We enter and walk along the straight white cobblestone path towards the statue of Queen Victoria. I ask Nitin if he will take my picture and as I walk up the steps towards her feet there is a flurry of requests from Indian people wanting selfies with me.  Hang on I don’t want her majesty pushed aside, after all this is her stage. I am a mere tourist, not royalty.  Nitin suggests I charge them for the privilege and then I can buy dinner. Queenie and I disapprove of course.

The building was built long after John Juman left Kolkata in 1906. It was finished in 1921 and was now a museum. Designed by architect William Emerson and built of white Makrana Marble. Sitting on top of the central dome is a brass statue of the Angel of Victory. Whose victory this belongs to now is a dubious debate but she remains up there looking down and wondering whatever happened to that Great British Empire.

We entered from the left of the building which led us into the interior evocative of a palace, the high space of the dome was breath-taking as we looked up in awe. A young Queen Victoria, gracefully carved in marble stands in the centre of the decorated circular room.  It felt so well preserved and although the building is only just over a hundred years old, the artefacts and photographs the museum contains date back further into history.  It is cleverly displayed. We are delighted to discover a picture of four medical students who left Kolkata in 1845.  My family history says John Juman was a medical student.  Could I be staring at my ancestor? This is the right date for his departure. Goosebumps on my arms send a quick shiver through me.

By the time we leave the museum and step outside, it has got dark. The sun has gone down over Kolkata and as they turn on the lights to illuminate the building I feel enlightened and emotional.  I look down to the statue of Queen Victoria on her massive marble throne, she sits with her back to this magnificent building. She must not be amused, she never set foot in India. She would have loved this place. Time is short and I really wanted to visit the medical college as they have records there.  It can wait. I am going to come back to Kolkata, that is for sure.

Due to Covid19, India has closed it’s international borders. I am not sure when I shall be able to return but I hope it will not be too long. I never finished my book about John Joseph Juman as I discover there is a lot to research here. The city is well worth a visit.